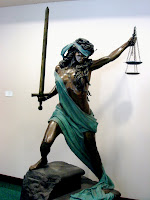 § Hitler came to power on a platform of German rebirth and renaissance. Germany he claimed did not lose the First World War; it was stabbed in the back by—well, who else, the Jews. He demanded only Lebensraum, living room for the masses, and the creation of a humanist socialist state. He came to power, democratically, but once in power destroyed democracy. He created a uniformed Hitler Youth to keep track of and report on their parents’ ideological purity or lack thereof. He ordered the removal of the Christian altar and in its place raised a portrait of himself girded right and left by NAZI flags. He required registration of firearms, after which he immediately confiscated them. He enacted national health care and destroyed the health care system. He made a dictatorship and declared war; he destroyed his country, his people and their families. He savaged Europe.

Kitty Wirthmann, an Austrian Jew, now living in the United States, tells of Hitler’s national socialist bounty—as it was only in the beginning. “We had big programs for families. All day care and education were free. High schools were taken over by the government and college tuition was subsidized. Everyone was entitled to free handouts, such as food stamps, clothing, and housing.”

§ Venezuela’s Hugo Chavez came to power through democracy. A man of the people— so say Danny Glover, Sean Penn and Hugo Chavez. He is, however, a despot who obtained from a “poodle” legislature the powers of dictatorship for one or two years. But Chavez will not give up dictatorship. He wants to be “El Presidente para la vida,” President for Life. Conservatives may well wonder what impact, if any, a permanent Chavez dictatorship will have on Venezuelan constitutional government. It is not at all the concern of an adoring Left.

Of course, things are not going all that well in the new proletarian Venezuelan paradise. Chavez, for complex economic reasons, is nationalizing everything in sight. Crime is endemic and the inflation rate is reducing to zero the savings of the Venezuelan people. Finally, predictably, the Chavez government, like that of Hitler’s national socialist government, is taking over the public media, so as to insure no doubt— according to a theory first espoused by our Supreme Court Justice Elena Kegan— that free speech be fairly redistributed, I suppose to each according to his need and from each according to his ability.

Simply outrageous. But it is so reassuring to know that our media and Internet are safe from government control. No one would dare think to restrict the operation of the airwaves or Internet. Rumors of a leftist threat to impose a Fairness Doctrine by which the government would take unto itself the power to compel conservative newscasters to fund leftist diatribes is quite obviously tea party propaganda. This after all is America.

§ Fidel Castro, of course, was all for La Gente, The People, before he imposed a communist dictatorship, created a version of the KGB even the Soviets envied, placed the narcissist murderer Che Guevara in charge of mass executions and began the imprisonment, torture and banishment of those Cuban citizens unwilling to submit to his materialist paradise. After all, did he not say that he was for La Gente?

Now, of course, no one sane is still enamored of Fidel Castro. His following once enormous is now limited more or less to a half dozen members of the Black Caucus, who, having visited Cuba, cannot say enough good things about him— well, that and several million certified lunatics who have a closet full of Che Guevara tee shirts, who wear them everywhere and are known to raise a clinched fist, get in someone’s face and shout out Potencia a La Gente! Potencia a La Gente! (Power to the People)—after which, self-satisfied, they repair to Star Bucks for a Mocha Cappuccino.

The United States government is now manifesting symptoms of the same political disease that has infected European and South American nations. The first, unmistakable symptom is lawlessness. Those individuals so infected actually believe that they may place themselves above the law that applies to everyone else. You may recall legal Philosopher A.C. Grayling’s definition of anarchy.

Anarchy literally means ‘without ruler or government’, and denotes a political arrangement in which there is no framework of laws or a governing authority. Anarchism is the theory that advocates anarchy in this sense; it is the theory held by those who argue for abolition of the state, defined as a body, which exists to maintain a compulsory legal order.

It is in the light of anarchy that we must diagnose the lawlessness of politicians whose oratorical elegance is exceeded only by their rabid demagogy.

§ On May 27, 2010, Secretary of the Interior Ken Salazar imposed "a six-month moratorium on permits for new wells being drilled using floating rigs" and "an immediate halt to drilling operations on the 33 permitted wells currently being drilled using floating rigs in the Gulf of Mexico." Salazar quite falsely claimed that his recommendations were "peer-reviewed" by "experts identified by the National Academy of Engineering."

A Louisiana federal district court enjoined enforcement of the moratorium. Salazar simply ignored the court’s order. Instead, he wrote and imposed a new moratorium, practically indistinguishable from the moratorium the court enjoined. His defiance is plain lawlessness. The district court held Salazar in contempt of court ruling that that Salazar acted with "determined disregard" and in "defiance" of the court and its rulings, in clear and convincing manifestation of government contempt.[i] Tragically, Ken Salazar is a resident of Colorado. The federal court may have the power to send Salazar to jail for six months. We can only hope.

§ Wisconsin politicians, before they may accede to the powers of political office must swear an oath. The Wisconsin Statute recites that “ Members of the legislature, and all officers, executive and judicial... shall before they enter upon the duties of their respective offices, take and subscribe an oath or affirmation to support the constitution of the United States and the constitution of the state of Wisconsin, and faithfully to discharge the duties of their respective offices to the best of their ability.”

The oath is a mandate; there is no exception whatever to its operation. While citizens may, like Thoreau, protest the government, beat drums, and, if they must, tout pictures portraying Governor Walker with a Hitler mustache or a right arm raised in a Zeig Heil, that freedom is forbidden the Senator who by his oath “…must faithfully discharge the duties of his office….”

The Fourteen Anarchists, as I have described the Wisconsin senators in last week’s column, are not heroes; they are not protestors; they are not upholding the glorious traditions of an American Republic nor are they Homeric heroes warring against the forces of evil. For all their oratorical tripe they are renegades who are destroying the American traditions they claim to uphold. If justice is to prevail they should be drummed out of office, by whatever means of impeachment or recall are available.

§ The president’s legion campaign promises included the promise that he would defend the Defense of Marriage Act, (DOM) passed by almost super majorities in the House and Senate and signed by former President Clinton. The president however, visited by yet another evolution in his feelings about homosexual marriage, has declared the DOM unconstitutional. Accordingly, he will no longer defend it in court. The president, of course, may not nullify, without grossly violating the Constitution, a law passed by Congress and signed by the president. The president is not “a one man Supreme Court.”

§ Attorney General Eric Holder dismissed a default judgment against two Black Panther men. One held a Billy club and stood at the entrance to a voting booth. Together the two uniformed bullies menaced white men and women. Holder refused to answer subpoenas issued by a Civil Rights Commission empowered by law to investigate the Justice Department. He suborned witnesses and otherwise obstructed justice. He claims now that the entire investigation “demeans my people.” But what people is he talking about? Are we not all of us his people? Are we not all of us Americans? Are we not one common people blessed by an American Creed? Or in the end do race, color and ideology trump harmony, mutual respect—and the rule of law.

Most Americans, secure in their constitutional freedoms, believe that South American and European destruction of Constitutional liberties could not possibly happen in America. Germans, however, in the 1920s, including Jewish Germans, enjoyed a similar complacence. Germany led the world in music, philosophy and science; and yet by 1944 Berlin was smoking rubble, and news of a holocaust had yet to horrify the world. But how could this thing have happened? Germany’s citizens—bankrupt, impoverished, unemployed, and starving, as they wept for their dead, as they recoiled at the machinery of the holocaust, were forced to recall that once when they were a democracy they voted Adolph Hitler into power.

Just as National Socialism destroyed German freedoms and condemned her to moral and economic decline, so lawlessness is diminishing the moral and economic power of America. The government, Republican and Democrat, compelled by an insatiable socialist vision, has diminished American freedoms. Just as a feudal aristocracy bound serfs to the earth, so a post war ruling class is binding Americans to the service of an elephantine, fiscally licentious, and failing welfare state.

What must be done? Well, November 2010 was a good start. Let us rid ourselves of plagues and renegades.

Posted by AMERICAN RABBLE at 6:24 AM