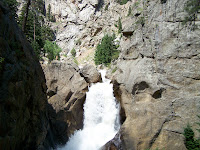 • The Attorney General of the United States decides to extend Constitutional rights to non-citizen terrorists for acts of war against the United States. These rights include a trial in which national security information could well be compromised. The trial itself may constitute a terrorist target, will certainly be a venue for spewing hatred of the United States and will impose millions of dollars of burden on taxpayers.

When questioned by Congress, the AG was unable to provide a coherent explanation, suggesting simply that the United States will be demonstrating confidence in our own system. By the way, this Rider has confidence in the military justice system, designed to handle just this type of judicial proceeding without the expense or risk.

• The Administration’s “Making Home Affordable” program, governed loosely by Treasury and ineptly managed by bailed-out Fannie Mae and Freddie Mac, is creating havoc in the industry while helping only a small percentage of borrowers. In addition to a continual barrage of complex and unclear program changes, differences in implementation procedures among Treasury and the two Agencies, the program design will never reach those borrowers with the greatest need and punishes those who have worked hard to stay current on their mortgages.

Just one of the latest head-scratchers: If a homeowner is currently making timely mortgage payments, but is in danger of “imminent default” and meets a few other requirements, the mortgage payment can be reduced to 31% of income. Once three consecutive payments are made, the payment is officially modified. The catch is that the homeowner is reported as delinquent as soon the first reduced payment is made and this adversely affects the homeowner’s credit rating. Thus, users of the program are unfairly penalized for following the guidelines set forth in this hastily-written program.


• The United States Senate is considering a health care bill that , despite widespread opposition in many constituencies, will provide for a public option that is likely to significantly increase the cost of insurance for most Americans. In all probability, it will eventually drive private companies out of business. To meet the President’s criteria of being budget neutral, we pay higher taxes for four years before seeing any benefits. The $200 billion to maintain doctor’s income is excluded, as are the hundreds of millions of dollars of Medicaid costs that are being passed to the states. The financial consequences of passing this bill would be serious in normal times, but are magnified by the current dismal economy, with over 10% unemployment and an enormous (and growing) national debt.

What needs no explanation? The urgency of exercising your vote in 2010.
Posted by Range Rider at 10:03 PM