A Fork in the Trail 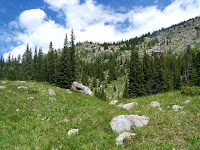 Sometimes it comes down to a simple choice. Like a fork in the trail, when, once taken, it’s hard to double back. America is at a fork. So is Colorado.

The fork in our trail is just up ahead, with the 2010 elections. Talk is that most folks like the choices we’ve been making. Word is the trail poses little risk to the average Joe, and we’ll get what we need to get down the path at little or no cost. At least that’s what they say.

At the fork ahead, we can go left or right. The left fork leads to where government, unions and interest groups look out for us and where equality of opportunity is transformed effortlessly into equality of outcome. It leads downhill, an easy path where most of us become average Joes, except the elite ones who overlook the trail and tell us the answers we want to hear and what to do.

It’s also the fork where America becomes just another member of the world community, “leading” by yielding its national interest for the greater global good, but getting nothing in return other than a Nobel peace prize awarded to encourage our downward path.

For Colorado, choosing the left fork again means more of the same overspending by the state legislature and poor decision-making at the Governor’s mansion. But this time we’ll have more unfunded federal mandates and higher Medicare costs.

The right fork leads uphill, a much harder path that requires both individual effort and a caring community. It’s a trail where each of us does our best, but not all will reach the top. But along the way, we all get stronger for the effort.

Nonetheless, it is well worn by generations of Americans who pursued their dreams, guided by enlightened self-interest, free from the cumber of the unintended consequences of misguided government intervention.

It ‘s the path that so many immigrants have come to climb, and that so many wait to come to climb. It’s the trail that makes America great, yes, even exceptional in the eyes of those who see clearly. Where the average Joe and Jane have a shot at the brass ring of his or her choice, reap the reward for the risk and effort, and along the way elevate the lives of others. Where innovation and creativity thrive, lifting the quality of life of countless people across the globe.

When the time comes, Range Rider will take the right fork and head back up the trail, hungry for the path to freedom. Ride with me!
Posted by Range Rider at 6:17 PM